About seven in 10 Americans (69%) believe that the job search today is too impersonal, according to the results of the latest American Staffing Association survey. 8 in 10 (80%) say that applying for a job feels like sending their résumé or job application into a “black box.”

Nevertheless, Americans do consider less-personal resources to be valuable when looking for work. Eight in 10 (83%) believe that technology has made finding a job easier. 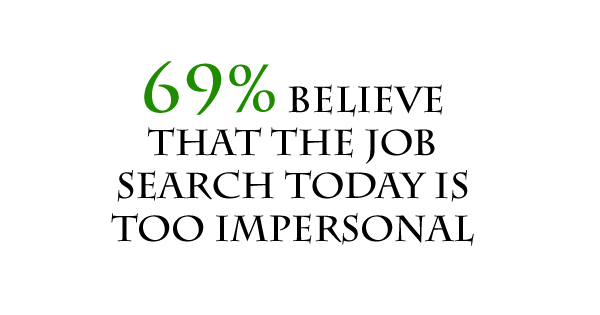 However, a majority says that emerging technologies (e.g., big data mining of résumés and job-on-demand apps) actually make it more difficult to land a job (59%), and that the Internet is not “all I need” to find a job (59%). In fact, even in this age of technology, 85% of U.S. adults think that personal contacts are more helpful than the Internet in finding a job.

Approximately seven in 10 U.S. adults cite in-person or face-to-face contact (72%), phone calls (72%), and email (71%) as acceptable ways to initially contact them regarding job opportunities. Only about one in four (24%) say text messages would be welcome.

“When recruiting talent, ‘high touch’ still wins the day,” said Richard Wahlquist, ASA president and chief executive officer. “Businesses that rely too heavily on a ‘high tech’ but largely ‘faceless’ process are sending the wrong messages to job seekers looking for connections with companies that value their employees.”

To learn more about the ASA Workforce Monitor, visit americanstaffing.net/workforcemonitor. You can also follow ASA research on Twitter.