Nomad Health, a healthcare technology startup launched by a team of doctors and serial entrepreneur Kevin Ryan, is expanding its healthcare jobs marketplace to include telemedicine opportunities. Doctors and nurses in the U.S. can now apply to telemedicine jobs, which are digitally transforming healthcare delivery and helping to solve doctor shortages in the United States. The startup is essentially looking to bypass recruiters. 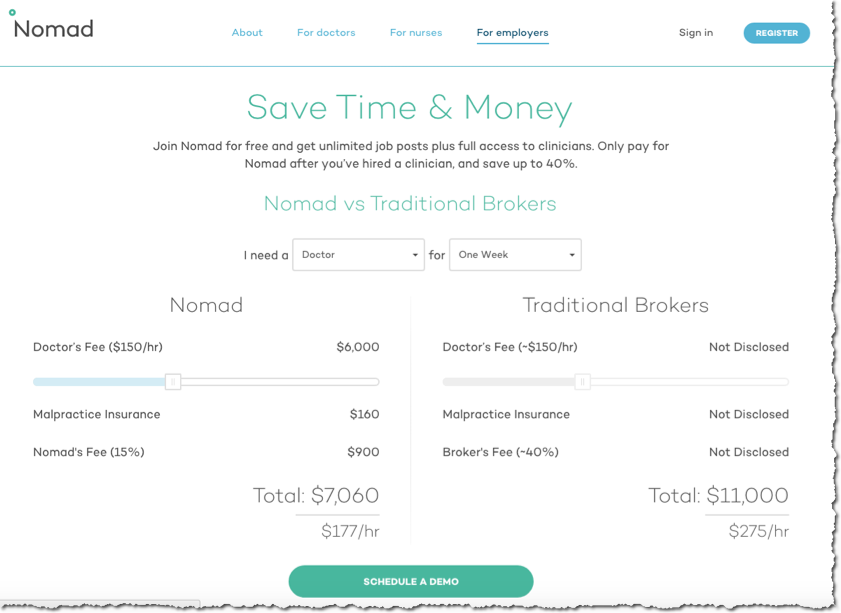 NEW YORK–Nomad Health, which operates the first online marketplace for freelance healthcare jobs, today announced that it has expanded into the rapidly growing telemedicine jobs market. After raising a $4 million Series A round in 2016, Nomad Health has launched its freelance platform for doctors and nurses, and now the company is broadening its innovative technology to connect doctors directly with telehealth employers – making it the first online marketplace for telemedicine jobs.

“Telemedicine is positively changing the way that healthcare is delivered in the U.S. It offers an incredibly promising solution to the difficult challenges of healthcare costs and access,” said Dr. Alexi G. Nazem, CEO and Co-Founder of Nomad Health, and a Harvard and Yale trained internal medicine doctor.

Founded in 2015 in New York City by a team of doctors and leading technologists, Nomad Health is simplifying the $15 billion temporary healthcare staffing industry in the United States. By removing third party recruitment brokers and directly connecting doctors and nurses to medical employers, the Nomad marketplace reduces costs, increases hiring quality, and speeds up the entire process for both sides of the healthcare marketplace. With over 25,000 clinicians already signed up to the streamlined platform and hundreds of medical employers actively hiring, Nomad Health has fast become a go-to new platform for matching clinicians to critical healthcare jobs coast-to-coast.

Telemedicine is an increasingly important mechanism to increase access to and reduce costs of care. The promise of telemedicine is especially valuable to areas that are suffering from critical doctor shortages. According to the U.S. Health Services and Resources Administration, over 65 million American currently live in “primary care deserts,” areas where access to primary care is either limited or non-existent.1 Today’s announced telemedicine expansion allows Nomad Health to help innovative telemedicine companies find and hire great doctors to serve patients remotely. Doctors now have a simple way to find and do clinical work from the comfort of their homes, and telemedicine companies, like American Well and First Stop Health, are using Nomad to hire more efficiently and effectively without middleman recruiters.

As for growth, telemedicine is projected to have seven million patient users by 2018 and to become a $36.2 billion industry as early as 2020.2 Approximately 90% of healthcare executives report that their organizations are already using or beginning to implement telehealth platforms, be they proprietary or one of the many independent services that have proliferated in recent years.3 Among consumers, 73% say they would discuss a health concern with a virtual doctor, and over half would use it for an annual physical exam.4

Nomad Health is already working with more than ten of the nation’s top providers of telemedicine, and the number of jobs on the platform has been growing quickly. Openings include tele-urgent care, teledermatology, and telepsychiatry jobs.