Here’s what I know so far on the SimplyHired shutdown. The Mic has dropped.

Although it’s no secret that SH has been struggling it is surprising that the end has come so suddenly without the company trying to transition to a new buyer. After all, the company has been around for 10+ years, has revenue, employs 100+ and has lots of brand equity. So what the hell happened?

On a hunch I plugged the site into Quantcast, the web stats company, and discovered something quite alarming. The site had been hit by a huge loss of traffic, no doubt from Google. It happened in mid February. 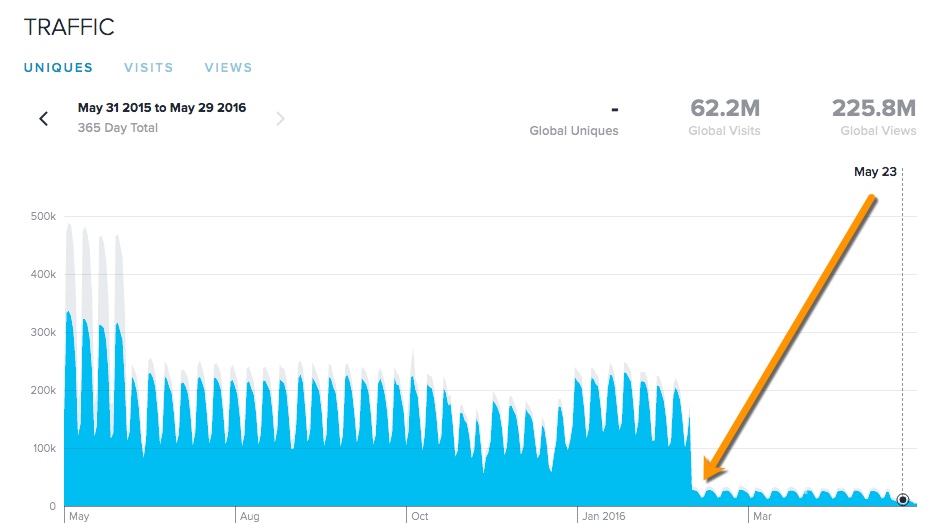 UPDATE 5/31/16 11:13am – BUT a new twist has emerged. I was alerted that Quantcast data may be incorrect. According to SimilarWeb, traffic has actually increased!

So whats going on? If traffic is good why the shutdown? This new info raises more questions then it answers. I did speak to one SH employee but they cannot say anything at this point. There will be more news to come thats for sure.

I reached out to some industry execs for comment, here’s what they told me.

First up is Lucas Martinez, Co-founder of neuvoo, an aggregator based in Montreal.

Does this news help or hurt you? If rumors are true, I believe it will be beneficial for other job aggregators since more “CPC” budgets from Agencies and Job Bards will become available to us. Also, we are going to compete with our peers and other recruitment platforms for their current API clients. There is also going to be some questions about the ability of Job Aggregators to generate large revenues and profits but this only depends on execution and not on the nature of the business model itself. We just need to look at indeed, neuvoo, or other job aggregators around the world that are very profitable business’.

In your opinion what do you think caused their downfall? Well I would not know exactly since I wasn’t there but we have been following Simply Hired for a long time. First of all, it is difficult not to compare Simply Hired with Indeed which were founded on the same year.  They raised 3 times more funding than indeed in their early years (source: crunchbase). In my opinion it’s mostly due to three reasons: the first one being monetization, if you compare with indeed they have not been as aggressive and successful in monetizing direct employers. The second one is costs; successful aggregators around the world run a very lean structure and are based in countries were engineers are paid a fraction to what their are paid in San Francisco. The third reason is that they fell short on their publisher program sales. Indeed managed to have their publisher program in many large media outlets with an important Link Building profile. This helped propel their SEO to heights we all know.

When I first heard the news I was very surprised, which quickly turned to not so surprised and now a little sad. Sad because SimplyHired was an early trendsetter in our industry and I believe they continued to play an important role the jobs ecosystem.

My relationship with SimplyHired like many of us in the industry goes back to the very beginning and for me that was early 2006 where at one time I personally owned over 300+ jobamatic sites. In the beginning, I think most people in our Industry would have put their money on SimplyHired and not the guys from the East Coast. We all know how that story turned out.

Four takeaways from the SimplyHired implosion. First, innovate or die. Easier said than done, but for a company like SimplyHired, I think that was their only way to survive the recent changes in our industry. Second, make quick decisions when needed and take action. Sometimes you just need to get out of your own way. Third, embrace and build meaningful partnerships. It is tough to be an isolationist in our industry and be expected to thrive. Forth, listen to your customers and partners. In the end, that is what really matters the most. Final thought, Google.

Here’s how some other execs are reacting;

It’s too bad…I know a lot of players would have bought them at the right price and potentially turned things around. It’s also clear that we are in a new era for job sites- things have changed so much. I believe it is in part due to the ecosystem in which it appears the majority of CPC buying is from job boards, on demand work forces like Uber, and agencies who are all increasingly using tools like Recruitics and ClickCast. This changes buying patterns and means performance matters more than ever because of the ability to measure in so many ways. Obviously Indeed is selling direct to employers successfully, but few others are.

In your opinion what do you think caused their downfall? The news was very surprising and sad for me.  I think the trend towards programatic ad buying, reliance on Google, and intense competition with Indeed and newer aggregators like Jobs2Careers changed the environment for SimplyHired (and significantly lowered their margins).

Will any Webscribble powered job sites have to switch backfill providers? As a job board software provider, we have supported backfill from SimplyHired for quite some time. Over the years, most of our clients made a shift to aggregators that provide higher CPC rates or a larger index of jobs that are of higher quality, so not many sites will be affected by this news.

“This will also be the fate of my aggregators in Europe. They have not managed to be distinct enough in the job seeker’s mind, hence only compete on volume and cost and that isn’t enough with Indeed and strong niche job boards around.”

“I’m blown away by the news. SH has been a great partner and a formidable competitor over the years. SH will always be remembered as an innovator in recruitment advertising, paving the way for performance-based job advertising to become mainstream.”

As for me, I’m more perpelexed than ever about whats going on. No one at SH is talking.

But if I had to breakdown some reasons why the shut here’s a few. In my opinion, they failed to compete with Indeed for several reasons that took place over the years.

One thing is certain. This is a huge win for Indeed no matter if they end up with the assets or not. It takes out a competitor and puts pressure on the remaining aggregators to deliver. The lesser players will surely get a short term boost in sales now that SH is no longer a place for employers to spend. Let’s hope they all learn from SimplyHired’s mistakes and continue to innovate, drive applicants or DIE.