Last week LinkedIn announced the launch of its new freelance marketplace called Profinder. After starting with a beta test last year it is now open to everyone in the U.S. Over 50,000 people have joined according to the company.

Freelance professionals can submit up to 10 proposals for free. After the 10th submission, they’ll need to subscribe to LinkedIn’s Business Plus subscription, which costs $60 per month. It’s an obvious move to increase their subscription revenue. In the future they may also host the payments and take a commission, a spokesperson said.

There are over a dozen different areas for which you can hire for. Strangely enough, the last one is for “Home Improvement“. If they are supposed to be targeting “white collar” professionals, I don’t understand why home improvement is listed. Who the hell goes to LinkedIn to find a carpenter?

And where are the recruiting related fields? Lots of recruiters are freelancers along with other HR consultants. It feels like they are ignoring their core user base.

Anyway, here is a look at what’s inside. I was finally able to get my application accepted and my profile approved.

I also just sent in my first proposal to help an app startup with a launch campaign. Freelancers can send in a response to a project by typing in a message and specifying an hourly rate or project fee. I found the project submitted to me to be lacking in much detail which forced me to send back a generic response requesting that we set up a call so I could learn more. 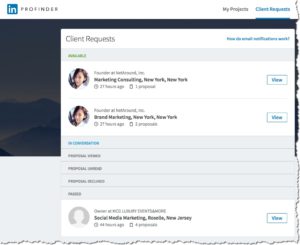 A look at project requests screen. Click to enlarge. 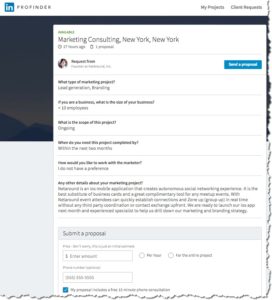 A look at what the freelancer responds to. Click to enlarge. 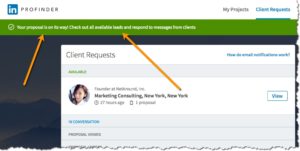 Profinder joins at least 12 other freelance job sites online today, according to CareerCloud’s job board directory.