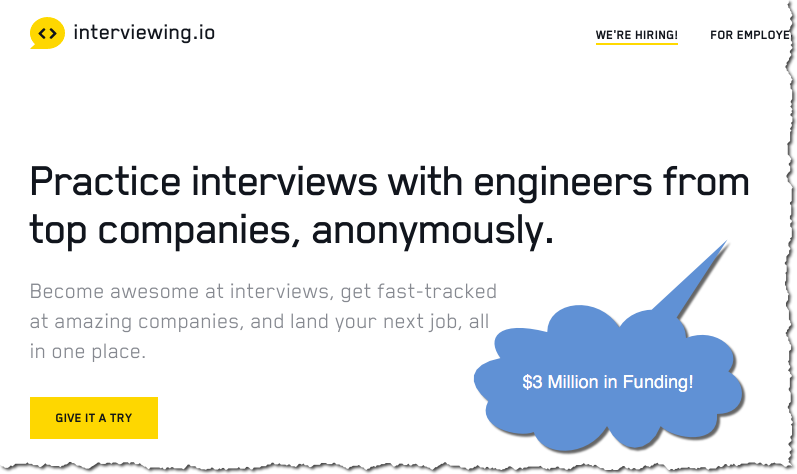 interviewing.io addresses arguably the biggest challenge tech companies face: hiring top-notch software engineers. While there’s certainly a shortage of engineering talent, the problem is exacerbated by outdated hiring practices. For example, despite consensus that pedigree isn’t a prerequisite for being a great engineer, hiring is still largely driven by where a candidate went to school or the last company they worked for. Even once they’re in the door, relying on how candidates do in a single technical interview is problematic, as performance has been shown to vary drastically from one interview to the next. And to make matters worse, data suggests that these flaws hit underrepresented groups the hardest.

interviewing.io is fixing all of these issues in one fell swoop by ditching resumes entirely and focusing instead on performance in a series of live technical interviews. It works like this: candidates get free, anonymous interview practice with top-notch engineers; the strongest performers then unlock the ability to book real (still anonymous) interviews with companies like Quora, Asana, and Amazon. Because aggregate interview data is much more predictive than a resume or single interview, most candidates pass immediately to an onsite, and companies who hire on the platform can go from first interview to hire in as little as a week. And because everything is anonymous, bias plays no role in who rises to the top. (interviewing.io has even built real-time voice masking to hide candidate gender.)

The company is using its new funds to bring the same blind, performance-based approach to university hiring, helping close the diversity gap where it begins. Traditionally, employers only visit a handful of top schools every year to get the most bang for their buck; these schools tend to provide students with extensive interview prep, putting those with access to these resources at a double advantage. interviewing.io will now offer students free technical interview practice and surface the best talent in the process. As a result, employers who hire on interviewing.io are able to expand their reach, forgo prohibitively expensive career fairs, and hire the best engineering students, period.

“We strongly believe that everyone should have an opportunity to learn, better themselves, and be evaluated based on what they can do, not their gender, race, socioeconomic status, or pedigree,” said Aline Lerner, co-founder and CEO of interviewing.io, a software engineer who previously ran a recruiting firm with clients like Airbnb, Dropbox, and Asana.

“While working as a software engineer at companies like Google and LinkedIn, I saw how much time was wasted on interviewing mediocre candidates just because they had nice resumes, and how hard it was for candidates without recognizable brands on their resumes to get a fair shot,” said Leo Polovets, Partner at Susa Ventures and one of the first 10 engineers at LinkedIn. “I’m very excited that interviewing.io is making interviewing more predictable, and making it easier for companies to find candidates they would have otherwise overlooked.”

“We have staffed multiple teams using interviewing.io,” said Chris Lyon, Technical Recruiting Manager at Twitch. “These are engineers whose resumes or backgrounds are atypical, but when given the chance perform better than most candidates.”

interviewing.io by the numbers: