The college recruiting wars just got more interesting. San Francisco based Handshake, an “early career” job market for students and young alumni has just announced a $40 million dollar round of funding. 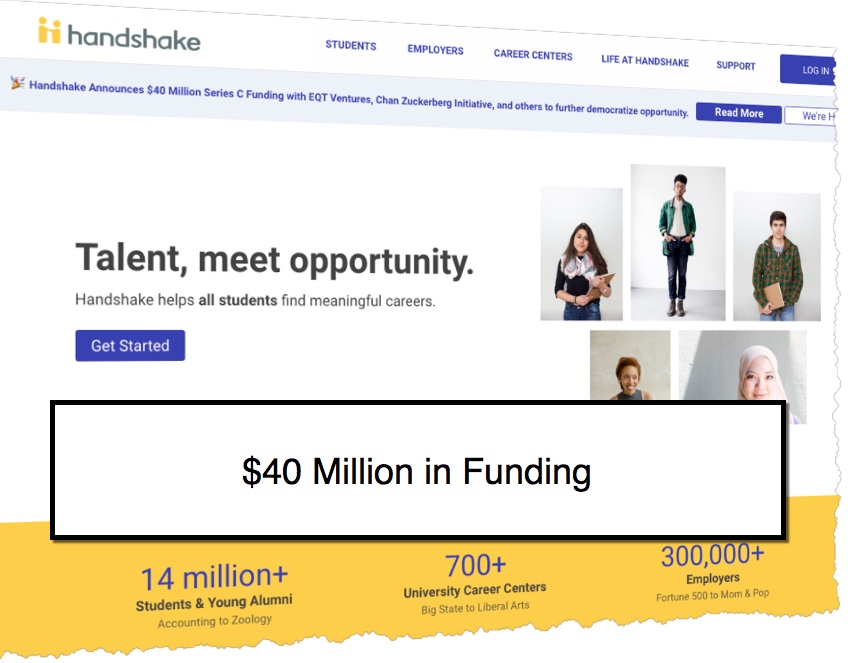 The Series C funding round was led by the EQT Ventures fund, a European multi-stage VC fund. This funding round also includes participation from social impact investors including the Chan Zuckerberg Initiative, Omidyar Network and Reach Capital,  among others.

Handshake was founded in 2013 by three Michigan Tech students. In addition to attracting employers the company partners with colleges and universities by creating basic profiles of their students once a school joins. That partnership allows them to build a database of applicants rather quickly.

Initially they launched with five initial partner schools and, today, Handshake says that the community now includes 700 colleges and universities, 14 million students and young alumni and 300,000 employers – including 100% of the Fortune 500.

Pretty impressive for a 5 year old job matching platform. They know how to scale. The college recruiting space also includes players like WayUp (which raised $18 million last year) in addition to established sites like Symplicity, CollegeRecruiter.com and others.

Handshake essentially wants to become the defacto starting point from new grads instead of going to LinkedIn.

“Our Handshake community is tackling the so-called ‘pipeline problem’ head on. Skilled students are on every campus in every corner of the country and we’re proud to help employers discover, recruit and hire up-and-coming talent from all backgrounds,” said Garrett Lord, Handshake Co-Founder and CEO. “Students around the world experience the same inequality in the recruiting process, so we’re excited to partner with Alastair Mitchell and EQT Ventures to expand our impact beyond the United States.”

The company has international plans too says their investor.

“Handshake is the leading, fastest-growing early-career recruitment platform in the US for students and employers,” said Alastair Mitchell, Partner at EQT Ventures. “We’re delighted to join forces with Garrett and the Handshake team on their journey, helping them to expand their footprint across North America and into new markets internationally with both financial and operational support.”

In this next phase of growth, Handshake plans to advance its product roadmap to continue to broaden the capabilities for each of the three-sided marketplace for students, universities, and employers. Today, Handshake offers a suite of Premium employer features in the newly-launched Talent Engagement Suite, empowering employers to source, engage, and hire the right students for their team, from every background, in every corner of the country.

Over the next year, Team Handshake plans to double, from 100 to 200 employees, with a focus on product, engineering and design efforts, with an emphasis on data and recommendations expertise. Find them on the web at joinhandshake.com.