With summer just about here, many employers can perk up their office culture by instituting some easy to implement perks to enable their workers to enjoy the warmer weather. The folks at Office Team just did a survey surrounding this topic.

But companies have cooled off on providing these benefits, according to the report. Sixty-two percent of human resources (HR) managers reported their organization offers flexible schedules at this time of year, down from 75 percent in a 2012 survey. About three in 10 employers (29 percent) relax their dress codes in the summer months, compared to 57 percent five years ago. Companies with shorter hours on Fridays also fell to 20 percent, a 43-point decline from 2012.

HR managers were asked, “Which, if any, of the following summer benefits are offered at your company?” 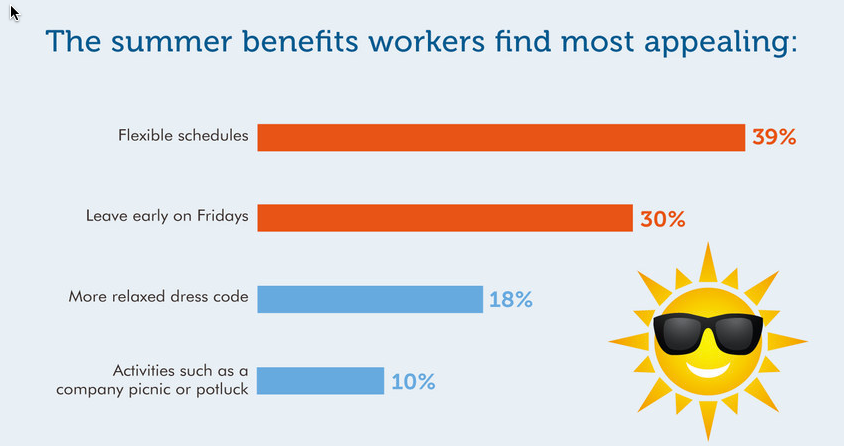 “It’s natural for employees to get distracted when the weather’s nice and thoughts turn to plans outside the office. But savvy companies maintain staff productivity and morale by embracing summer in the workplace,” said Brandi Britton, a district president for OfficeTeam. “Letting employees modify their schedules, leave early on Fridays or dress more casually when it’s hot out are easy ways to keep them loyal and engaged.”

OfficeTeam offers managers five tips to help staff make the most of summer at work:

About the Research
The surveys of HR managers and workers were developed by OfficeTeam. They were conducted by independent research firms and include responses from more than 300 HR managers at U.S. companies with 20 or more employees, and more than 380 U.S. workers 18 years of age or older and employed in office environments.