As a kid I used to love watching the old Godzilla vs Mothra movies on the Saturday afternoon movie. The two behemoths would battle it out over Tokyo while I listened to the strangely dubbed American version. The voices never quite synced to the actors but I didn’t care. I was 10 and glued to the TV.

These days a new battle is brewing in Japan, this time over jobs and its being driven by the ‘Godzilla of jobs’, Recruit Holdings.  This movie has me glued to my news feed.  Just moments ago it was announced that the parent company of Indeed is buying Glassdoor for $1.2 billion in cash.

According to the press release, Glassdoor will continue to be run as a stand alone company under current CEO Robert Hohman.

“Glassdoor has transformed how people search for jobs and how companies recruit. Joining with Recruit allows Glassdoor to accelerate its innovation and growth to help job seekers find a job and company they love while also helping employers hire quality candidates,” said Robert Hohman, Glassdoor CEO and co-founder, who will continue to lead the company.  “I look forward to leading Glassdoor through this exciting new chapter, and to exploring ways to use our combined resources and assets to benefit job seekers, employees and employers once the deal closes.”

So now RH owns two of the biggest job sites as it prepares to take on Mothra (aka Google) in the new battle for online job supremacy. I think its clear by now that Recruit is laying down a scorched earth policy as it sucks up the biggest players in online recruiting…most recently Workopolis and before that SimplyHired.

They are not taking any chances in the new war with Google Jobs. Traffic is king and they are scooping up gobs of it now that Google has entered the fray. According to stats provider Similarweb, the two combined sites now have approx 422million monthly visits worldwide. 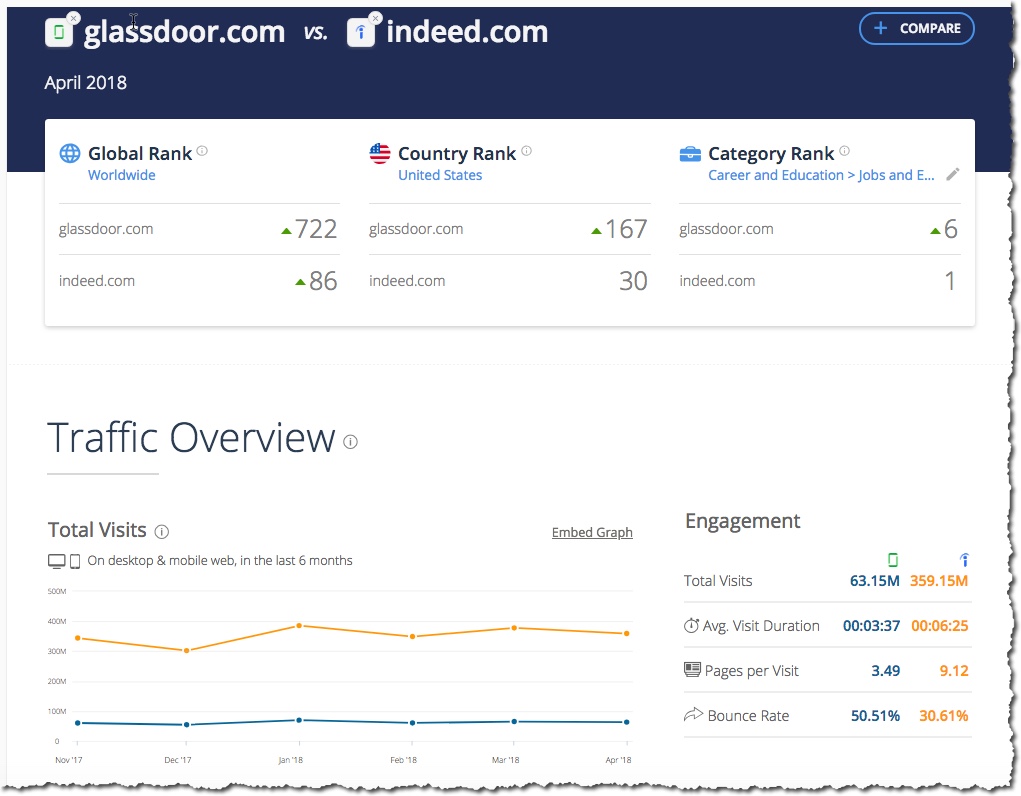 What This Means for Employers and Job Seekers

If history is any guide, clients of Glassdoor should expect price increases once the dust has settled. Indeed is in the midst of new price point changes, I have heard that GD has already been raising prices on clients that some of them have balked at. Now that they have a new owner, that pressure will increase.

What really piques my interest is the overlap between Indeed and Glassdoor. They essentially offer the same product, job aggregation and company reviews. What RH is getting here is mindshare and traffic that buys them time against whatever plans Google and LinkedIn have up their sleeves.

The online recruiting market is moving towards a scenario where a few companies control virtually the all the traffic and can dictate certain things to employers and job seekers alike. That could be good or bad depending on your perspective.

Aw heck, I’m going to go watch Godzilla vs Megalon and wait to see what happens next.