Recently Facebook made a big announcement. It is launching a stand alone app for Buyers and Sellers to facilitate that audience interaction on mobile. This new move begs the question. Will they ever launch a stand alone jobs app? 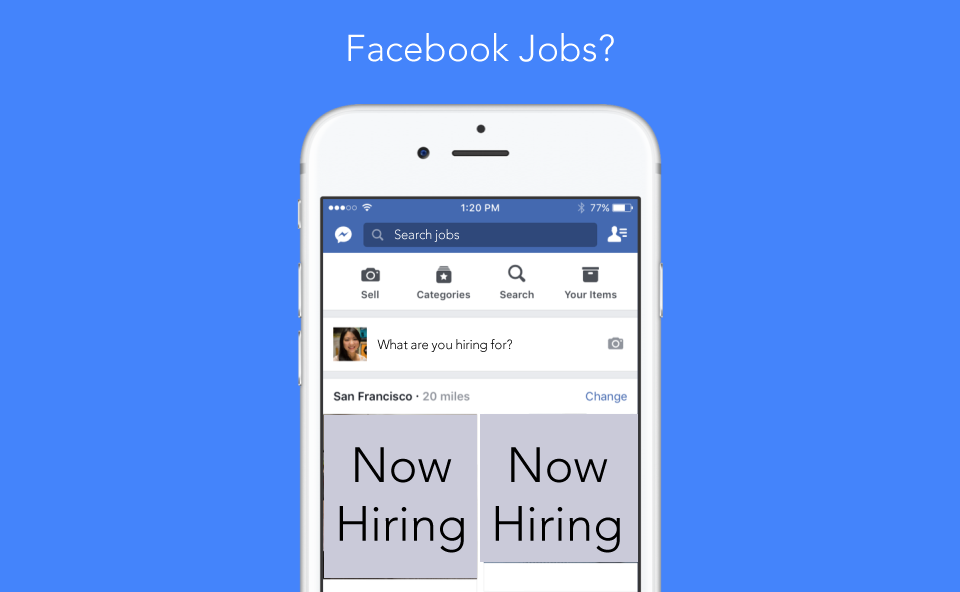 I think it could happen. Back in 2007 they launched the desktop version of Marketplace which included job listings. That feature never took off but in 2014 they launched Buy&Sell groups and that has been flourishing on the platform ever since. Launching a stand alone app for these users will help grow that user base even quicker. This might be a death blow to other marketplace apps like Lets Go and will certainly hurt the Craigslist buy/sell listings.

The new Marketplace app lets you search by keyword or category. You can also list an item for sale directly through the app. Sounds like the perfect functionality for a job listing service too. An app for jobs could help the thousands of job search groups now on the site to get even more traction and help make jobs more findable. There are hundreds of thousands of jobs being posted to Facebook every month in a variety of local and industry related groups.

After the 2007 Marketplace closed down, job listings disappeared. Users however picked up that baton by sharing their own jobs and creating groups like this to help people find work/and or talent.

A Facebook Job app would be a huge hit in my opinion. The question is whether or not Facebook execs see jobs as a new channel worthy of support. Some years back there was rampant speculation of a Facebook job board that never materialized. But if they actually decide to do it, they could fire a big shot across the bow of sites like Indeed and Craigslist and steal some of their traffic.

I for one am rooting for it. It would further the online recruiting space, get recruiters to pay more attention to Facebook and keep things a little more interesting.