I attended the Huawei European Innovation Day recently, and was enthralled by how the new technology is giving rise to industrial revolutions. These revolutions are what will eventually unlock the development potential around the world. It is important to leverage the emerging technologies, since they are the resources which will lead us to innovation and progress. Huawei is innovative in its partnerships and collaboration to define the future, and the event was a huge success.

For many people, the concept of Artificial Intelligence (AI) is a thing of the future. It is the technology that has yet to be introduced. But Professor Jon Oberlander disagrees. He was quick to point out that AI is not in the future, it is now in the making. He began by mentioning Alexa, Amazon’s star product. It’s an artificial intelligent personal assistant, which was made popular by Amazon Echo devices. With a plethora of functions, Alexa quickly gained much popularity and fame. It is used for home automation, music streaming, sports updates, messaging and email, and even to order food.

With all these skills, Alexa is still in the stages of being updated as more features and functions are added to the already long list. This innovation has certainly changed the perspective of AI being a technology of the future. Al is the past, the present, and the future.

Valkyrie is another example of how AI exists in the present. There are only a handful of these in the world, and one of them is owned by NASA. They are a platform for establishing human-robot interaction, and were built in 2013 by a Johnson Space Center (JSC) Engineering directorate. This humanoid robot is designed to be able to work in damaged and degraded environments.

The previous two were a bit too obvious. Let’s take it a notch higher.

The next thing on Professor Jon Oberlander’s list was labeling images on search engines. For example, if we searched for an image of a dog, the search engine is going to show all the images that contain a dog, even if it’s not a focal point. The connected component labeling is used in computer vision, and is another great example of how AI is developing in present times.

To start with a guess, and end up close to the truth. That’s the basic ideology behind Bayes Rule, a law of conditional probability.

But how did we get here? All these great inventions and innovations have played a major role in making AI a possibility in the present. And these four steps led us to this technological triumph; 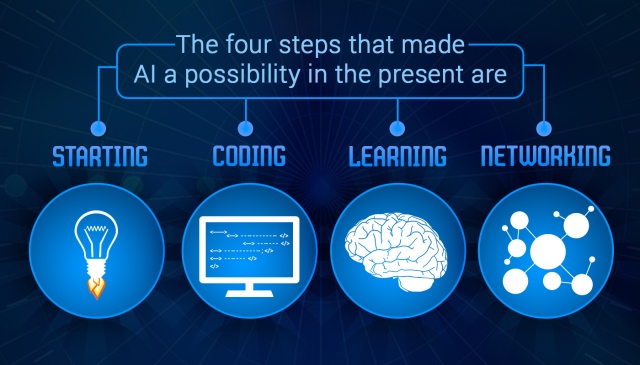 Now that we are here, where would this path take us? It has been a great journey so far, and it’s bound to get more exciting in the future. The only way we can eventually end up fulfilling our goals is through;

With extensive learning systems, it has become imperative to devise fast changing technologies, which will in turn facilitate the spread of AI across the world. With technologies such as deep fine-grained classifier and the Internet of Things, AI is readily gaining coverage. And this is all due to Thomas Bayes, who laid the foundations of intellectual technology.